The fossil fuel industry’s business model is to externalize its costs by clawing in obscene subsidies and tax deductions—causing grave environmental costs, including toxic pollution and global warming. Among the other un-assessed prices of the world’s addiction to oil are social chaos, war, terror, the refugee crisis overseas, and the loss of democracy and civil rights abroad and at home. 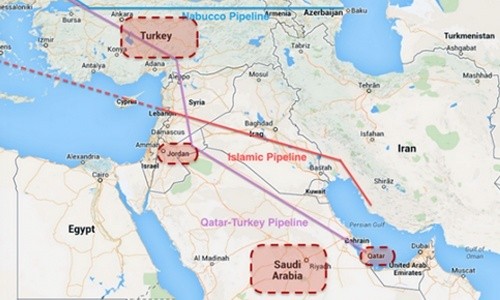 As we focus on the rise of ISIS and search for the source of the savagery that took so many innocent lives in Paris and San Bernardino, we might want to look beyond the convenient explanations of religion and ideology and focus on the more complex rationales of history and oil, which mostly point the finger of blame for terrorism back at the champions of militarism, imperialism and petroleum here on our own shores.

America’s unsavory record of violent interventions in Syria—obscure to the American people yet well known to Syrians—sowed fertile ground for the violent Islamic Jihadism that now complicates any effective response by our government to address the challenge of ISIS. So long as the American public and policymakers are unaware of this past, further interventions are likely to only compound the crisis. Moreover, our enemies delight in our ignorance.
Read the full story from RFK Jr. here: Syria: Another Pipeline War | Ecowatch

In response we have

By Stanley Heller — Stanley Heller is Administrator of and writer for Promoting Enduring Peace and hosts “The Struggle” TV News, at www.TheStruggle.org. He can be reached at stanley.heller@pepeace.org.

Back in February environmentalist Robert F. Kennedy Jr. wrote a piece for Politico called “Why the Arabs Don’t Want Us in Syria”.  It concluded that the war in Syria is the result of a U.S.-Qatari plot owing to the fact that Syria spurned a plan for a Qatar pipeline that would cross Syria.  The piece was pretty much demolished by Craig Claiborne in late April  yet it has been recently sent around again by a Peace Council activist.

Claiborne made the following points. a) U.S. support for Syrian opposition started before Assad rejected the pipeline  b) U.S. monetary support was tiny and mostly for a video station based in England c) Qatar was considering another pipeline route that avoided Syria completely d) Kennedy’s sources are all from the West, none from Syria  e)  Kennedy gets the story about soldier defections all wrong    f) Kennedy decides Assad is best for “us”, that is the West.  A tyrant with his torture and murder is safer for “us” than the risk of Arab “anarchy”.