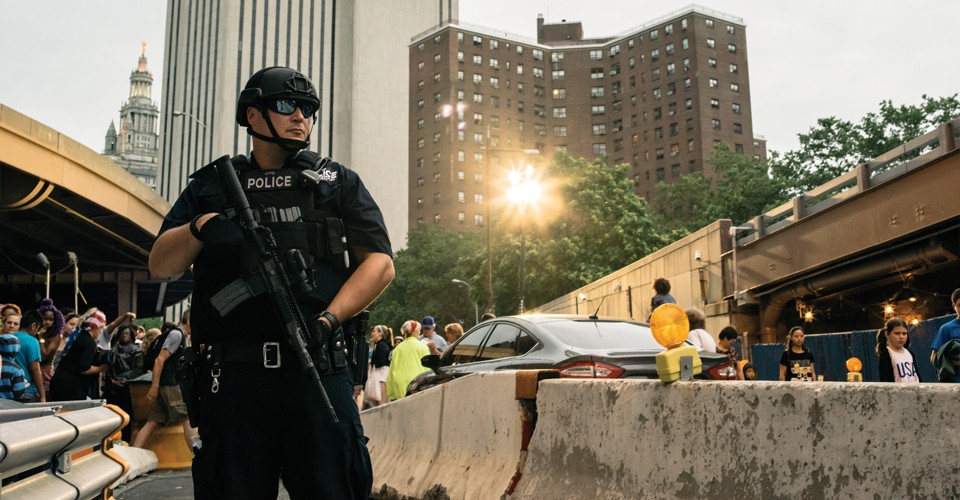 Photograph by Greg Kahn / A member of the NYPD’s counter­terrorism unit stands guard near the Brooklyn Bridge in New York City, July 4, 2016.

Fifteen years ago this September 11, 19 terrorists, using four jetliners as guided missiles, killed 2,977 people—and enveloped the country in fear. It was the first sustained attack on American soil since the bombing of Pearl Harbor, which was a far-off military base. This massacre hit the center of our government and blasted away part of our most iconic skyline. It left a stench that New Yorkers could smell weeks later as remains continued to be recovered from the ashes.

Suddenly, we were vulnerable. Not just to disease, tornadoes, accidents, or criminals, but to the kinds of enemies that had always threatened others but never us.

Barack Obama remembers that after the second plane hit, he left the Chicago building that housed his state-Senate office. “I stood in the street and looked up at the Sears Tower, fearing it might be a target, too,” he told me in a recent email exchange, adding, “I remember rocking Sasha to sleep that night, wondering what kind of world our daughters were going to grow up in.” He continued, “With nearly 3,000 people killed in the places where we lived our daily lives, there was a feeling that our homeland was truly vulnerable for the first time.”

This is the story of the first 15 years of how we have dealt with that newfound fear—how we have confronted, sometimes heroically and sometimes irrationally, the mechanics, the politics, and the psychic challenges of the September 12 era….

Have we succeeded in toughening up what overnight became known as “homeland security”? Absolutely. But not without a series of extravagant boondoggles along the way.

Are we safer? Yes, we’re safer from the kind of orchestrated attack that shocked us on that September morning. It’s harder for terrorists to get into the country, and harder for them to pull off something spectacular if they do. But we have not plugged some of the most threatening security gaps. Worse, as the Orlando massacre reminded us, the world has become more populated by those who want to exploit those gaps, including those living among us—and who, in the United States, can easily obtain military-grade weapons. They are not deterred by the prospect of their own death, and they are happy to commit acts less ambitious than those of 9/11. That makes their attacks much harder to detect in advance. Our defenses are far stronger, but what we have to defend against has outpaced our progress.

Have we adjusted, politically and emotionally, so that we can make rational decisions as a government and as a people to deal with the ongoing threat? Not yet. In a bitterly divided democracy, where attention spans are short and civic engagement is low and the potential for oversimplification and governing-by-headlines is high, that is hardly a surprise.

But in those first hours after the planes hit their targets, we did answer the call—which required an almost complete turnaround of America’s mind-set and produced just as stunning a turnaround in our security posture.