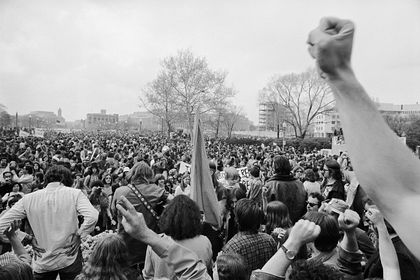 A prescient passage from a forgotten book has been making the rounds since Donald Trump’s election. It’s plucked from a 1998 book titled Achieving our Country. The author is Richard Rorty, a liberal philosopher who died in 2007. The book consists of a series of lectures Rorty gave in 1997 about the history of leftist thought in 20th-century America.

Members of labor unions, and unorganized unskilled workers, will sooner or later realize that their government is not even trying to prevent wages from sinking or to prevent jobs from being exported. Around the same time, they will realize that suburban white-collar workers – themselves desperately afraid of being downsized – are not going to let themselves be taxed to provide social benefits for anyone else.

At that point, something will crack. The nonsuburban electorate will decide that the system has failed and start looking for a strongman to vote for – someone willing to assure them that, once he is elected, the smug bureaucrats, tricky lawyers, overpaid bond salesmen, and postmodernist professors will no longer be calling the shots.

Today, Rorty’s words read like prophecy. Something has cracked. People have lost faith in the system. A strongman is upon us. So what happened? Over the course of three lectures, Rorty proffers a theory. He traces the history of the modern American left to show where, in his view, it lost its way, and how that digression prepared the way for the populist right. The story he tells is compelling, detached, and often oddly romantic. But it’s supremely instructive, even when it sputters.

Wake Up to Trump, Distraction and War with Iran | Ralph Nader