Living As If Another World Were Possible: Goodbye, David Graeber! | Daniel Fischer

Dan Fischer is a New Politics editor and a Promoting Enduring Peace board member. He can be reached at dfischer@riseup.net.

Having grown up hearing his father recount experiences in Anarchist-run Barcelona as a Lincoln Brigade volunteer, David Graeber, a renowned anthropologist and organizer, lived according to a lifelong belief that a far fairer world was possible. His father and his mother, a garment worker who was briefly the lead singer in the union-produced Broadway musical Pins and Needles, were Jewish working-class bookworms who filled their shelves with books about radical possibilities. Graeber, born in 1961, recalled: 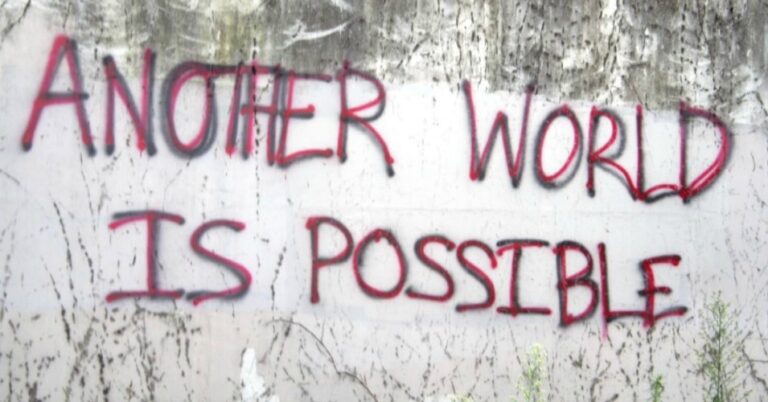 “There were a lot of books around the house when I was growing up, but almost no books of critique. I mean I’m sure my parents had Marx’ Capital, at least volume one, but very few books about how awful the world was. They had lots of science fiction, lots of history, and lots of anthropology. I think their attitude was ‘I spent my nine to five working, experiencing how this system sucks for myself; I don’t need to read about that; I want to read about what other ways of existing might be like.’”

This is interesting because as a public intellectual (who taught at Yale and London School of Economics), Graeber was probably most well known for his social critiques. Heavily influenced by the autonomist Marxist tradition, Graeber viewed neoliberalism as primarily a political project masquerading as an economic one, and he exposed the system’s convoluted methods of keeping people demoralized, resentful, and hopeless about building a better world. These instruments of hopelessness included debt (Debt: The First 5,000 Years), corporate bureaucracy (The Utopia of Rules) and pointless work (Bullshit Jobs: A Theory). Graeber aptly described that last book as “an arrow aimed at the heart of our civilization.” It argued that most of our working hours are not producing anything useful, and that the workweek could easily be reduced to fifteen or even twelve hours if it weren’t for capitalists’ drive to keep us perpetually busy. “The ruling class has figured out that a happy and productive population with free time on their hands is a mortal danger,” he wrote, “Think of what started to happen when this even began to be approximated in the sixties.”

To me, however, Graeber’s more inspiring works focused on discovering and building alternatives. He had a keen eye for spotting utopia in seemingly unlikely places. During fieldwork in highland Madagascar in 1989 to 1991, he found that the IMF-weakened state performed only nominal functions, and communities actually governed themselves with consensus decision-making on most matters. His study of the Iroquois League’s Constitution challenged notions that democracy, feminism, and anarchism are of exclusively European origin. And in contrast to the mass media’s dismissal of “incoherent” U.S. protesters, Graeber’s Direct Action: An Ethnography and The Democracy Project explained how the horizontal structure of the alter-globalization and Occupy Wall Street movements prefigured the world they sought to build. Over the last few years, Graeber championed the direct democracy experiments in Northen Syria (Rojava). And, with co-author David Wengrow, he dismantled the widespread assumption that early civilizations were uniformly hierarchal. To the contrary, “Egalitarian cities, even regional confederacies, are historically quite commonplace.”

You can read in other obituaries how much of an intellectual giant he was. Within his field, Maurice Bloch called him “the best anthropologist of his generation” and his advisor Marshall Sahlins called him “the most creative student I ever had.” When Yale decided to end his contract in 2004, it was clearly due to his involvement in radical direct action, not the quality of his scholarship and teaching.

As a deeply engaged activist, Graeber was famously pivotal in launching Occupy Wall Street in New York in 2011, and I remember seeing him there when I brought a group of Wesleyan University classmates to the first night of the encampment. He didn’t stick around very long, because he didn’t want to become a leader or figurehead. As my friend explained at the time, “He’s very good at being an anarchist.”

Back on campus, I convened a meeting of student activists, many of them newly radicalized by Occupy, and we initiated a horizontally-run course on “Direct Action and Radical Social Theory” inspired by a course of that title that Graeber had taught at Yale in 2004. Thanks to the sponsorship of two hands-off professors, Wesleyan actually allowed dozens of students to take it for credit, and of course we were very welcoming to non-students who showed up to participate. We wrote to Graeber letting him know we were going to use his 2004 syllabus, and he wrote back humbly, “This sounds great, and I’m really rather flattered that you’re doing it. The syllabus must be quite out of date by now.” We took his advice and rewrote it democratically, using consensus to decide on readings on and by the Zapatistas, Argentinian autogestion, Black Panthers, Clamshell Alliance, Social Ecology, Ecofeminism, Earth Liberation Front, Situationists, and other movements. For one meeting, we read and discussed a debate between Graeber and Chris Hedges over black bloc tactics, and, unsurprisingly most of us were convinced by Graeber’s “Concerning the Violent Peace Police” which defended the black bloc. I surely was not alone in finding that course to be the most enlightening I’d ever taken. When I think of how common activist burnout is, it’s noteworthy that many, probably most, of my classmates are still involved in radical organizing projects even now almost a decade later.

I think part of the reason we stayed involved is that we were infected, at least indirectly, with Graeber’s hopeful attitude that “Mass direct action — especially when organized on democratic lines — is incredibly effective.” He wrote this in 2007’s “The Shock of Victory,” which, like many of his best writings, was published not in an academic journal but in the radical press (in this case, the Anarchist journal Rolling Thunder). It argued that the United States’ two most recent examples of mass direct action, the anti-nuclear and alter-globalization movements, achieved their medium-term goals without anyone really noticing. Specifically, these movements were followed by a halt on new nuclear power plants, the derailing of ambitious “free trade” deals, and a weakening of the IMF and World Bank.

Instead of joining the chorus asking why Occupy Wall Street failed, he asked, “Why did it work?” I sympathized with that question, because I remember my friends and I discussed on the first night how we’d probably be cleared out by police pretty rapidly without leaving much permanent impact. Instead, we spread and sparked deep shifts in the country’s common sense, paving the way for a fringe leftist Senator to become the country’s most popular politician and for ideas like anti-capitalism and the abolition of police to become acceptable dinner table conversation topics. Adopting Immanuel Wallerstein’s terminology, Graeber claimed Occupy and the Arab Spring jointly comprised a “world revolution of 2011” whose effects may one day be understood as comparable to 1848’s, 1917’s, or 1968’s.

In contrast to more dogmatically “anti-imperialist” parts of the Left, Graeber held a nuanced, internationalist stance that prioritized the needs of democratic rebels worldwide. For example, he refused to accept the crude geopolitics that reduced Libya’s situation to solely a conflict between NATO and Gaddafi. In a 2011 comment that we at New Politics are happy to make once again publicly available, Graeber likened both statist powers to “Darth Vaders” and reserved his solidarity for the popular rebellion.

In his last few years of life, Graeber’s politics were rapidly moving in exciting directions. Softening his earlier gradualist approach to social change, his writings on Rojava began championing “‘revolution’ in its classical sense, let’s say: the overthrow of an existing structure of power and the ruling class it supports by a popular uprising of some sort, and its replacement by new forms of bottom-up popular organization.” Although I sometimes disagreed with Graeber’s rosy portrayal of Rojava’s Democratic Union Party (PYD), I found myself eagerly watching his evolving views as the dire climate and ecological situations make revolution, whatever that might mean in our time, a matter of ever-increasing urgency.

Beyond being an extraordinary anthropologist and organizer, Graeber was a brilliant philosopher, and his very best essay may be a little-known 2014 Baffler contribution titled “What’s the Point if We Can’t Have Fun?” Drawing on fields as diverse as animal studies, subatomic physics, and cosmology, it makes a surprisingly convincing case that the universe may be fundamentally conscious and playful. What a rebuke this is to the dominant view that we live in a “mindless, robotic universe” and its depressingly conservative and anthropocentric implications. Had he lived longer, Graeber might have penned an expanded treatise on reality that would be every bit as important to the Anarchist canon as Peter Kropotkin’s Mutual Aid and Murray Bookchin’s The Ecology of Freedom. And given Graeber’s engaging, fun writing style, I’m sure the book would be read far outside of activist circles.

I never personally knew him, but I understand that he was generous and compassionate to those who did. His death last week came as a devastating surprise. He was only 59, and he had much more to contribute to the building of a world beyond capitalism and beyond hierarchy. Undoubtedly, he would want us all to keep building that world and to have fun doing so.

As Graeber wrote in the preface to Direct Action: An Ethnography, “[T]o live as a rebel—in the constant awareness of the possibilities of revolutionary transformation, and amongst those who dream of it—is surely the best way one can live.” He genuinely lived by these words. No one was more skilled at finding possibilities and hope in unlikely places, and he lived according to his rational, radical convictions. Goodbye, David Graeber!