Almost six decades ago when I was just a child I remember that almost daily I visited my uncle’s house. He was the elder of the Qumsiyeh clan. He was a mayor of my town for a while. He was highly respected for solving any issue in town between families. He was a quiet man and he would listen carefully but when he spoke with his raspy soft voice, everyone would listen. People who wronged others would apologize and social order was restored. The whole town admired this man who they respectfully called Abu Jalal (father of Jalal). Behind every man indeed is a great woman and Um Jalal was one of the kindest people I knew. When my uncle Abu Jalal was not working (teacher, school principal, superintendent of schools in Bethlehem) or acting as the elder to resolve crises, he would spend time with his eight children or he would play cards with his brothers (my father & uncles). He was one of eight children and he had eight children. My late maternal grandparents also had eight children including my mother and my professional role model the late uncle Dr. Sana Atallah (first Palestinian biologist, killed age 27).

I remember one day when I first saw a calculator at Abu Jalal’s home. I do not remember if he or another uncle brought it but I do remember over 15 children in the room all wanting to touch it and test it and competing in this with our uncles. No cards were played that day. It was such a novelty. My paternal uncles were all teachers of things like science or math and we loved the curiosity and the sense of discovery they instilled in us by example because they were genuinely interested in knowledge for the sake of knowledge. These uncles are all dead now. But this and a thousand other memories came flooding in my mind the past few days as we lost both Um Jalal (mother of Jalal – last week died of Corona) and her son (my cousin Jalal) who died today (cancer). Jalal suffered over the past few months and I had felt so sad for him. Jalal was not only a cousin but he was a close friend. He was a teacher who lost his job because he opposed the Israeli occupation. He wrote a book on the Qumsiyeh family. He was the oldest of my cousins (though not the first to die). I loved him dearly… a piece of me died with him. It is so sad to gather around coffins first of a mother and a few days later of her son.  As always, a loss of close people reminds us of the borrowed time we have. It reminds us that only good deeds in life are what matter. It is not money or nice clothes or a nice house but what we do to each other that matters. I take this opportunity to apologize to those I may have offended and to pledge to redouble my own efforts to look inward, to be kind, and to love more. Here is something I wrote when my own father died. 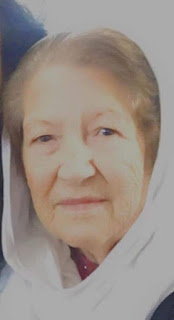 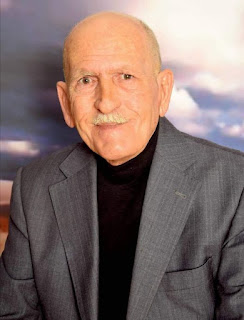 It seems our lives here are one sad story after another. Here is what I wrote on the passing of my own father also on a Sunday (5 October 2003)

Tuesday I managed to enter Palestine. On Sunday October 5, 2003, at 10:25 a.m. as I held his hand, my father took his last breath in the same village in Palestine where he took his first in 1929.  At the last checkpoint on my way in, I had to walk across and find a ride home. I asked a guy with a phone next to a car if I could use his phone to call my family to send someone. We exchanged a few words and he was from my hometown. He said he will give me a ride home in a few minutes. We called and rode the 10 minutes ride home as if flying. Everyone was there but to me it was all a blur between the checkpoint and my father’s bedside. There he lifted his head and his functioning left arm, his voice quivering and unintelligible he started to cry as we hugged. My sisters tried to calm him down saying it was ok, I arrived safely, nothing happened. He shook his head and said something they interpreted to mean that I should have not troubled myself.  After about a while he lay back physically and emotionally exhausted, looked around the room at the many faces of all his relatives then closed his eyes betraying his pain despite the sedatives.From that Tuesday to Sunday his condition deteriorated very rapidly. On Tuesday and Wednesday, I was able to decipher very few of the words he tried to say. He briefly awoke at rare things. Once smiling at my cousin, once on Friday he attempted to tell Umm Jalal (his deceased brother’s wife) that she should not trouble herself to come to visit him. Once he raised his head to look at his sister and he once exerted a faint, painful smile at his great-grandchild Yazan.  We, his children took turns taking care of him with our mother. He suffered and died in dignity. This great educator had an accomplished life. He was a teacher, a school principal, and an entrepreneur (once managed a club and once a children’s toy store.) But above all he raised six children and imparted on us and his 11 grandchildren all that is good – teaching us to care for all fellow human beings. He was never bitter or angry over the misery that he and other Palestinians endured. He just preferred to live and encourage others to live. He insisted to me that he should die in his homeland and he breathed his last breath in his own bed surrounded by his wife, children (five of the six as my sister was still in Jenin), grandchildren, and close relatives. I felt a strange sense of miracle as bells coincidentally (?) rang just in the few moments of his death. An Islamic call to prayer also “coincidentally” sounded along the way to the prayer and burial. Thousands came to pay their respects. My father left us a heavy burden yet he leaves us a great deal of love and wisdom. Mish ra7 niksifak yaba (we will not fail you father.)

And here is what I wrote on the death of many children 9 years ago
http://salem-news.com/articles/february162012/compassion-palestine-mq.php

This story was previously published on Mazin’s blog http://popular-resistance.blogspot.com/2021/02/calculator-and-coffins.html and is reprinted here with permission.