I’ve been telling friends that on a scale of 1 to 10, my trip to northern Minnesota to stand with indigenous folks fighting the Line 3 tar sands pipeline was a 20. That was for many reasons: the compatible group of elders with whom I traveled for 26 hours from MA and CT to the resistance camps; the indigenous women, 2-spirits (gender-fluid, gay and trans) and youth in the camps who are creating a new world even as they fight passionately against the extractive mentality and reality of the old world; our visit to the headwaters of the Mississippi River, which for me was a very powerful spiritual experience; our non-violent direct action for which we were arrested, spent a night in jail, and face three misdemeanors we will pursue in zoom court; and even the weather, which was cool, sunny and calm every day we were there. (If you don’t want to read the whole post, skip to the bottom for suggested actions you can take.)

We stayed at a VRBO near the Giniw Collective camp and on the first day there was a decolonizing workshop, led by several of the indigenous folks from several countries/nations. One of them defined “decolonizing” as “realizing what we actually need.” And living in harmony with nature, not “taming” and exploiting it.

The action was blocking both entrances to a man camp – the temporary housing where pipeline workers who are not local (which is most of them) stay while building the pipeline. Eleven of us locked down in three different ways, blocking the two access roads and stopping work for the day. The action was part of Awareness Week for Murdered and Missing Indigenous Women, Girls and 2-Spirits, as studies and anecdotal evidence show that violence skyrockets when these man camps are set up very near indigenous communities. According to data from the U.S. Bureau of Justice Statistics, in cases of reported rape or sexual assault of indigenous individuals, 82% of the perpetrators were white. Other studies looked specifically at the rise in crime around man camps. Overall, indigenous people experience per capita rates of violence that are more than twice those of the U.S. population as a whole.

I was locked down with four other women elders from our affinity group, the Mayflies. Due to our concerns about hip, knee and shoulder issues, we sat in chairs, three of us locked down together through PVC pipes covered with tar and stones, yarn and duct tape, and all of us chained together with heavy gauge chain and padlocks. One of the funnest parts was when supporters began the chant, “What do we do when we’re under attack? Stand up, fight back!” and we chanted, “Sit down, fight back!”

The cops came and efficiently deconstructed our gear, but it still took them awhile. Two other groups of three people each were locked down inside much bigger things (like concrete-filled barrels), which took several hours to break apart.

The big mercy was that – for the first time in my past several arrests – we were handcuffed in front, not in back. I had worried about the cuffing because of my frozen right shoulder, and as we sat in the police van for at least 90 minutes, I was even more relieved that we were cuffed in front.

We were given orange socks, pants, t-shirt, overshirt and sweatshirt and sent to a room to strip, overseen by a woman cop. We were treated by the book, though humanely, and definitely benefited from our white (and probably elder) privilege, so who better to take action than us?

When we were told we’d all be in separate cells I was dreading the boredom to come, until they offered each of us a book from the jail library. Hallelujah! I found a novel written by a Minnesota author that looked, and was, pretty interesting: Peace Like a River. Too bad I didn’t get to finish it.

My 6’x12’ cell was clean and comfortable, which was another surprise, as usually jails are freezing. I had two long, narrow (a few inches wide) windows that looked out on a pocket park with some tall evergreens and benches. I thought about how I would feel in that cell if it didn’t have a window, and it wasn’t good.

We were arraigned the next morning and have Zoom court dates in June and are being represented by a great movement lawyer. A few dozen folks from camp greeted us upon our release, with food, coffee and hugs all around. We were really pleased that the young people not only considered our frailties, but by the end they also appreciated the decades of experience we brought with us.

Later that day our affinity group drove about an hour to the headwaters of the Mississippi, flowing out of Lake Itasca. We got there at sunset and were the only people there. You could feel the power in the spot, and the beauty was transcendant. Then we saw several places just a few miles from the headwaters where Enbridge has done preliminary work to drill under the river, posting signs that read “Sensitive wetland/water body.” Which seems like a good reason not to drill.

The next day we headed to the Welcome Water Protectors camp about two hours east, across Great River Road from the river. I interviewed several women, indigenous and non-indigenous, about their experiences fighting Line 3. On Sunday we canoed in a Mother’s Day/May Day action on the river. One of the Anishinaabe women described her vision of creating a space for folks to be in recovery from addiction to fossil fuels, and when we paddled down the river, they had hung 12 banners that drew on the 12 steps of Alcoholics Anonymous and other self-help recovery programs.

We bid farewell to Anishinaabe territory Monday morning and did nothing but drive for the next two days (with a hotel stop at midnight). Now we’re trying to adjust to the “real world,” back home, when I really think the world folks are building in the camps, in sync with nature, defined by commitment to each other and to their goals of indigenous sovereignty and ending fossil fuel extraction, is the “real world,” or could be. The indigenous leaders of the Line 3 fight called us to come and stand with them, and I am very grateful and honored that we did.
?
Photos are of me crossing the headwaters, with Lake Itasca on the left, cnstruction by Enbridge a few miles away, and me and my fellow arrestees. More info about why we took action, and what you can do, is at Giniw Collective on Facebook (scroll down a bit). One thing is to go there in early June for a mass gathering, or later for smaller actions; another is to donate much-needed funds; another is to amplify the struggle. We have to create the kind of visibility the ten-year fight against KXL generated. It’s the same filthy bitumen from Alberta and the same destruction of indigenous lands, the health and culture of the people who are impacted, and the climate. We expect to do some presentations in CT and MA, and I would love to talk to any of you one on one if you’re thinking of going to MN or just want more information. Click on “Contact” and I’ll send you the link to a webinar about it on Tuesday, May 18 (likely recorded). 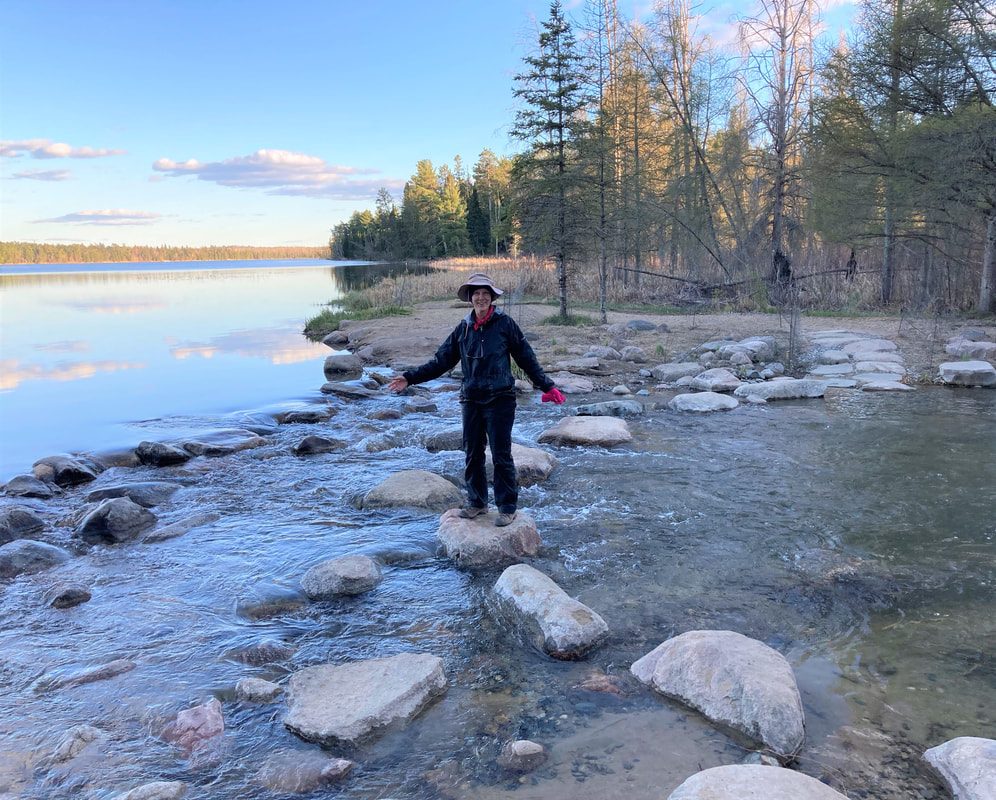 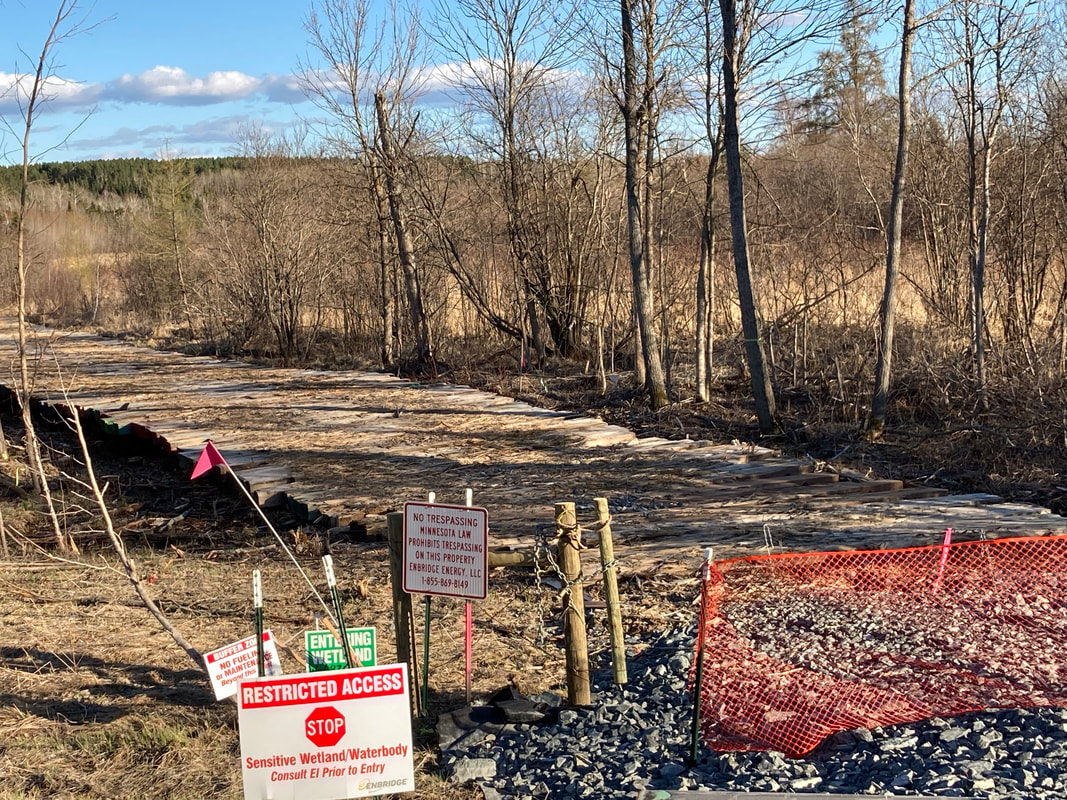 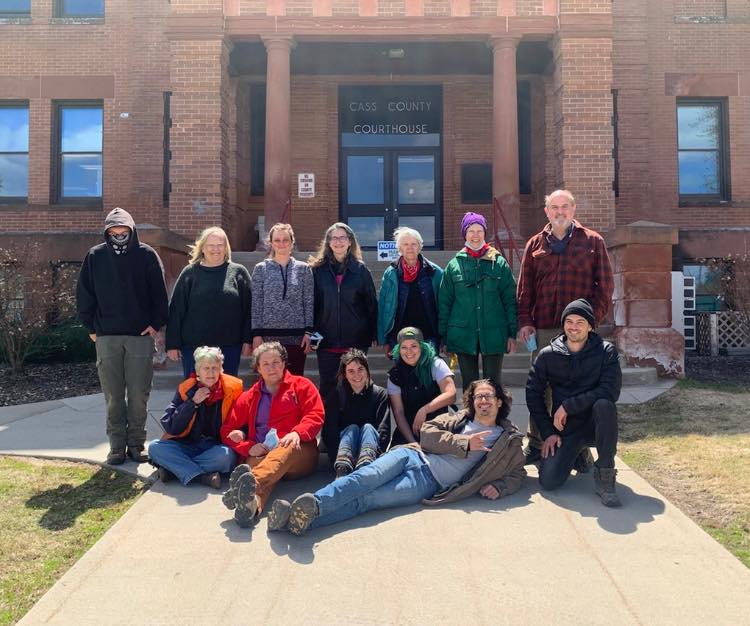 This article was previously puslished on Melinda’s blog: Leaves and Fishes – MelindaTuhus.net and is reprinted here with permission.